We are currently OPEN for SUNDAY SERVICES. Or catch the livestream by clicking on the link in the yellow "Next Service" block below. Coffee hour after the service, masks optional. We hope you will join us! CLICK HERE for the latest information and updates from the COVID19 Task Force.

Our Symbol: The Flaming Chalice 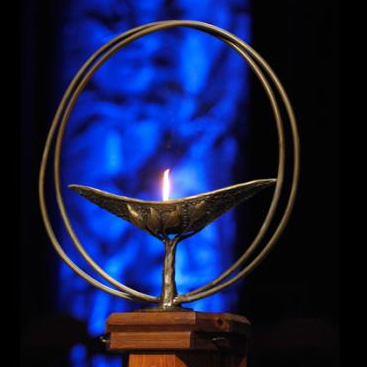 A flame within a chalice (a cup with a stem and foot) is a primary symbol of the Unitarian Universalist faith tradition. Many of our congregations kindle a flaming chalice in gatherings and worships and feature the chalice symbol prominently.

The symbol had its origins in a logo designed by Austrian refugee Hans Deutsch for the Unitarian Service Committee (USC) (now the Unitarian Universalist Service Committee) during World War II.  According to USC director Charles Joy, Deutsch took his inspiration from the chalices of oil burned on ancient Greek and Roman altars.  It became an underground symbol in occupied Europe during World War II for assistance to help Unitarians, Jews, and other people escape Nazi persecution.  To Deutsch, the image had connotations of sacrifice and love.

To Unitarian Universalists today the flaming chalice is a symbol of hope, the sacred, the quest for truth, the warmth of community, the light of reason, and more.

We light a flaming chalice in worship to create a reverent space for reflection, prayer, meditation, and singing.