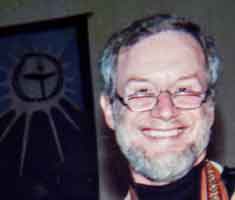 In 1978 Pete Tolleson became the first minister of the Greenville Unitarian Universalist Fellowship (GUUF).  He accepted $6000.00 to work half-time and was approved by a 40/4 congregational vote.  His second spouse Mary Leta and only daughter Robin moved with him to Greenville from Virginia.  During 5 years at GUUF, religious education, music programming, and a regular and high-quality newsletter attracted notable attention in the community.  At least 2 young members of the growing congregation were inspired by Pete to become UU ministers.  Pete publicly revealed his homosexuality in a memorable sermon given in the Fall of 1982.

Pete Tolleson was born in Greensboro, NC to Louis Tolleson and Mariel Tolleson-Nee Buquo.  He graduated with an occupational therapy degree from Duke University in 1954.  He was a member of the gymnastics team. After spending 4 years in the Army and time in Greenville, SC, he went to California to attend Starr King School for the Ministry in Berkeley.  Pete was ordained as a Unitarian Universalist minister in 1964.  He took his first pulpit the same year at the Unitarian Church in Charleston, SC where he served for 5 years.  He also was minister of the UU Church of Arlington, VA before coming to GUUF.  In 1967 Pete was selected to conduct the memorial service for the poet Carl Sandburg in Flat Rock, NC.  In 1984 Pete, Mary Leta, and Robin moved to Asheville, NC where he was pastor of the UU Fellowship of Hendersonville, NC for one year.  He worked as manager of the print shop of Warren Wilson College and until 2011 continued to serve others performing weddings and as a pastoral counselor. He water skied on his 75th birthday on Lake Keowee.

Physically gifted, enormously creative, and a lover of all kinds of animals, Pete was a man you could not forget.  Children particularly enjoyed his knowledge and revelations about nature and astronomy.  While at GUUF he cared for and often shared a python and a tarantula.  A percussionist for the Greenville Symphony, the incredible sounds of the tympani drums once filled the Buist Ave. meeting space.  He brought the fantasy game Dungeons and Dragons to GUUF.  He was a skillful silversmith, wood carver, and artist/lithographer, supplementing his income by selling his creations and repairing jewelry.

In 2014 Pete married Ron Marable.  They were together for 10 years until Pete’s death.  Pete’s daughter Robin Zweig and granddaughters Jeanette Tolleson and Donia Zweig live in the Asheville area.  Pete is survived by his sister Martha Hanson, niece Raelin Hansen, and nephew Lou Hansen.

Pete’s compassion, humor, inquisitiveness, and questioning nature inspired and entertained so many.  A great listener, rarely upset, and genuinely helpful, he significantly put Unitarian Universalism on the map in Greenville. His positive impact on the success of GUUF remains evident today.  Thank you, Pete Tolleson.