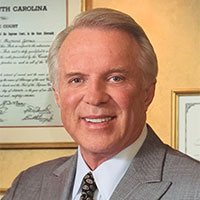 Dick James, a pioneer in lawyer advertising, died on January 13, 2019. A memorial service was held on Thursday, January 24 at 2:00 pm at the Greenville Unitarian Universalist Fellowship. Born on July 9, 1937 in Gaffney, South Carolina, he was the son of the late Louise Kirby James and John Boyce James. He was predeceased by a sister, Mary James Harkey, and his beloved Basenji Hound, Abbigale.

He attended Gaffney High School and was admitted to the University of South Carolina in 1957 after his junior year at Gaffney High School without having to graduate. While in High School, he worked the second shift at Cherokee Finishing Company where he started out as a cloth layer and was soon promoted to printer. Also, while in high school and college, he was a member of the South Carolina National Guard for 8 years. He finished the University of South Carolina earning a Bachelor of Arts degree in Political Science in 1961. While an undergraduate, he worked part time at the SC DOT after class and full time during vacations. He earned a Juris Doctor degree in 1964, and was admitted to the bar that same year. In law school, he worked after class as a probation officer for the SC Pardon and Parole Board. He was assigned to the Richland County Court office where he attended many court sessions. He credited his success as a trial lawyer to the training he learned there. In 1994, he completed the Harvard University School of Law Negotiation Program for Lawyers. He was a loyal Gamecock and a member of SAE Fraternity where he earned the Lumpkin Award which was presented to the outstanding senior active for his service to the fraternity.

He came to Greenville in 1965 and began practicing law with the late Richard J. Foster. For many years, he was an active trial lawyer in the areas of personal injury and criminal defense. He settled the first products liability case in Greenville County. He represented thirteen women charged with murder and acquitted ten of the thirteen. In 1988, he won the first murder case in Pickens County in over 50 years. He was successful in having a Family Court, for the first time in South Carolina; require a mother to pay child support for a child whose father had won custody. In 1973, he won the largest verdict in the history of Greenville County for the wrongful death of a 12 year-old girl. He was the first lawyer to try a case in Greenville County after women were allowed to serve on juries in the state courts of South Carolina.

Dick was disdainful of the self-righteous and the intolerant. He took great pride in his memberships in liberal organizations. A proud Democrat, and lifetime member of the ACLU, Dick also held memberships in the NAACP, People for the Separation of Church and State, the American Humanists Association, and a life member of the Freedom from Religion Foundation. He was a longtime participant in Alcoholics Anonymous and practicing Yoga.

He is survived by his life’s love, Sandra B. James, of the home: two sons Richard Foster James of Asheville, NC and William Ervin Jones of Charlotte, NC: a granddaughter, Naiya James of Savannah, GA; a daughter, Susan Monique Scrimager (Aaron); grandson, Jett Scrimager; nephews, Richard Harkey and his wife, Peggy, of Fayetteville, NC; and nephew, John E. Harkey of Charlotte, NC.  PS: The service was epic, even for those who did not know Mr. James well!