We are currently OPEN for SUNDAY SERVICES. Or catch the livestream by clicking on the link in the yellow "Next Service" block below. Coffee hour after the service, masks optional. We hope you will join us! CLICK HERE for the latest information and updates from the COVID19 Task Force. 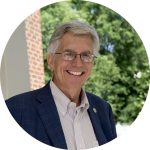 Thomas Strange is a Founder, Executive Director, Artistic Director and Chief Curator of the Sigal Music Museum. He holds a BS and PhD in Physics, as well as a BFA in Art Studio, from the University of South Carolina. He is a Technologist and founding member of Maven Capacitor, SC Launch, and SCBIO, and is an early keyboard authority and sponsor of the “Changing Keys” exhibit at Colonial Williamsburg.

Dr. Tom Strange, has given our community a real treasure with his Sigal Music Museum, sharing its amazing collection of historically significant keyboard and wind instruments and access to solo and chamber music performances.  Marshall and Jeannette Winn had the pleasure of taking our piano donor, Rem Stokes, as well as pianist Zachary Hughes, to the museum (then called Carolina Music Museum) just before the GUUF inaugural concert featuring Rem’s beloved Bösendorfer piano.  Tom came to hear Zack play at GUUF and also at a cul de sac concert this fall hosted by GUUF member Jon Grier.

Since Zack’s Beethoven Odyssey concert series at GUUF had to be canceled after only three concerts due to Covid, Tom and Zack decided to do a Beethoven’s Quarter Millennial series at the museum, recording all 32 Beethoven piano sonatas, some on both modern and historic pianoforte instruments in the museum’s collection.  The first two sonata recordings were posted on the Sigal Music Museum’s Facebook page on December 16, Beethoven’s 250th birthday.  Their plan is to release the sonatas weekly, and they will each be posted in their entirety for a limited period of time, so check it out regularly:  https://www.facebook.com/search/top?q=sigal%20music%20museum.

The sonatas are also on Zack’s YouTube channel:   https://www.youtube.com/channel/UCaS7NNOcYthnt-EweE7sDeg