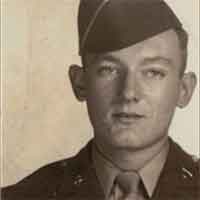 Bob Hoelzel grew up in Methune, Massachusetts near the Merrimac River. He had great memories of playing baseball in the summer and sledding down the hills or playing ice hockey on frozen lakes during the cold winters.
During WWII Bob joined the Army, and his infantry served under General George Patton as part of the Third Army. After the war, Bob received a BA in Economics from Harvard and attended graduate school at the University of Michigan.
Bob’s work history included retail experience with Woolworths and JC Pennys and he served as comptroller for Central Piedmont Community College in Charlotte, NC for the last 25 years of his career. After retiring to Greenville with his wife, Barbara in 1987, one of the first things Bob did was to determine how he could get involved in the community.
In an interview in 2013 Bob recounted the following:
“I decided the best way to meet people and to understand a new community was to become involved in volunteer work, so I joined “Meals on Wheels”, and started attending the Greenville Unitarian Universalist Fellowship. Conversations with Gil Rowland, one of the founding fathers of GUUF, led to the formation of a Sunday morning discussion group which I moderated. It was a diverse group of about 15 people and I enjoyed the discussions and debates. Gil became my best friend and introduced me to many local people. From the time we met in 1987 until he died 6 years later, I saw Gil at least once, and usually twice, weekly. He was always ready for a lively discussion, and I often attended meetings at his house on Saturday afternoons, along with other friends. Many times it was just the two of us discussing books, history, and philosophy. We could talk for hours, never seemed to run out of things to talk about, and the conversation was always pleasant. At the time we met, he had been retired for almost 20 years, but he still had the curiosity of a journalist and loved to explore ideas. When he died, it left a big void in my life and I still think of him with great affection.”
As a volunteer with AARP in the upstate, Bob kept getting “promoted”. Eventually, he became the Assistant State Director of AARP in South Carolina, and served in that capacity for three years. He attended many meetings in the Southern half of the US, and often spoke about the health care bill which had been introduced by Hillary Clinton, and was strongly supported by AARP.
Bob also became involved with the Cleveland Street YMCA, raising funds to send underprivileged children to camp. He was the top fundraiser for 3 years.
In his later years Bob spent a lot of time on the computer following the stock market as he had done for over 50 years, beginning with his oversight of the investment of millions of dollars while with Central Piedmont Community College.
Bob’s favorite old movies included: “You Were Never Lovelier” (1942) with Rita Hayworth and Fred Astaire, and “Broadway Melody” (1940) with Elinor Powell and Fred Astaire.
Classical music gave him great pleasure, particularly classical guitar, and he loved the big bands. He said “Listening to Duke Ellington, Guy Lombardo, and Benny Goodman still brings a smile to my face.” He had great memories of attending Harvard dances with the big bands playing, and wearing his special Harris Tweed jacket, which was all the rage.
Curiosity and the love of learning were two personal characteristics that were constant in Bob’s life. He was an avid reader and enjoyed sharing information about history, astronomy, genetics, biology, politics, and medical science. Bob often gave friends copies of articles that he found interesting. He enjoyed the Sunday morning discussion group at GUUF for many years. Two members of the discussion group had the following comments:
“I have known Bob since the Gil Rowland days of Discussion group.  Bob was a gentle giant.   His intelligence and wit made it a pleasure to spend time with him.  There was a period of time when he facilitated our group and it was always lively and stimulating.  I will miss him.  The world needs more people like him!”
By Barbara Gill

“I only knew Bob for a short few years but enjoyed our time together. He lived life his way, accomplished a lot and gave a lot as I understand his history. Bob had an inquisitive, and bright mind with strong opinions.” By Richard Kelly

When asked what advice he would give someone who wants to live a happy life, Bob said “I would tell them to do things they really enjoy and not to be afraid to make mistakes.”
Bob had a brilliant mind and a kind heart. He was a staunch supporter of the Greenville Unitarian Universalist Fellowship for 30 years. Bob Hoelzel left the world a better place because of his presence and he will be greatly missed.