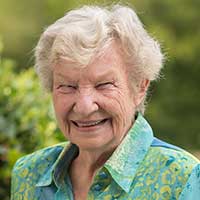 Ann Hill was born Dec. 31, 1929 in Dayton, OH. Both her parents are buried in Arlington National Cemetery and her father served in both World War I and WWII. Dh died in World War II in 1944. She was their only child. Ann graduated from Vassar in 1951 and she did graduate work at UCLA Berkley.
She worked as an actress in New York City, but spent most of her career in the office of the president of the University of South Carolina in public relations. In that capacity she hosted a Sunday morning public television show, often interviewing celebrities who were visiting the USC campus. Just before her retirement, she wore a USC name tag that simply bore the word, “Writer”.
She lived at the Westminster retirement community in recent years and was an active member of the Greenville Unitarian Universalist Fellowship. She attended “A Course In Miracles”, belonged to a covenant group and participated in senior lunches.
She died on December 1, 2014 at the Greenville Hospital System. A devoted friend, Suzanne Hart, rarely left her side as she passed.

Ann’s ashes will be spread in the memorial garden at a later date.