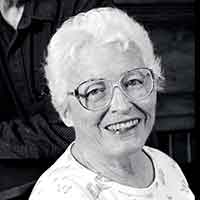 Suzanne Casgrain Hart passed away peacefully at home on June 30, 2020. Born in Quebec in 1922, she was the daughter of Lydie Prince Casgrain and Perrault Casgrain, who served as President of the Canadian Bar Association in 1972. Her uncle Jacques Casgrain was a judge married to Thérèse Casgrain, the famous advocate for the rights of women and the poor. Suzanne was a journalist and music reporter in Montréal, where she married Douglas G. Hart, a British 2nd Lieutenant in the Second World War. She taught Latin and French in Greenville high schools after the family moved to South Carolina in 1965. Douglas passed away in 2005. They were both loved by their many dear friends at the Greenville Unitarian Universalist Fellowship. Suzanne is survived by her daughters Christine, Joy and Suzy, for whom she was a constant bright light, and by two grandsons, Matthew and Douglas.

In lieu of a funeral gathering, the family would like donations to be made to a favorite food bank or to Doctors Without Borders.