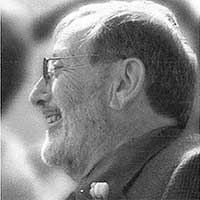 Bob Gill, 84, was the husband of Barbara Tomberg Gill. He was born in Chicago, IL. He was the son of the late William and Vida Harkless Gill.

Bob was a retired designer with Fluor and will be terribly missed, not only by his family, but by everyone who came to know his fun-loving and generous nature. His friends at the Keowee Sailing club will remember his love of sailboats and the joy and sense of freedom he felt being on the water. He also enjoyed ushering at the Peace Center, when his welcoming face greeted visitors so often. Others will be reminded of him when they see his visible handiwork – not only was he able to fix anything, but he was also an excellent woodworker and was known for his small tables and beautiful trays. He was a kind and gentle man, loving to his family and a fine example of a husband, father, grandfather and father-in-law. He will live in our hearts always. In addition to his parents, he was predeceased by a brother, William.

A memorial service was conducted at 7pm on Tuesday, October 26, 2010 at the Unitarian Universalist Fellowship, 1135 State Park Rd., Greenville, SC 29609