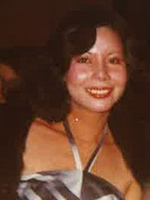 Maria was born in Manila, the Philippines. She received a B.S. degree from St. Thomas University in Business and Accounting.  Languages and music were a large part of her upbringing.  At home, English, Spanish and Tagalog were commonly spoken.  At the “Goethe Institute”, she took classes in German.  As a child she took piano lessons and later in life participated in numerous recitals.  Her wishes to visit Europe came through when family friends invited her to come to Milan Italy.  Maria’s interest in art, history, antiques and love for classical music were always in her heart.  Living in Italy and later Germany, she took every opportunity to do just what she loved so much.

Moving to the United States brought new challenges and excitement. After a short stay in San Francisco, Maria moved to New York City where she worked for an International Travel Agency.  She started to take classes in cooking and modern painting.  Maria and Juergen met in NYC, married and moved on to Wilmington, Delaware and eventually, Greenville, SC.

Son Christian was born and Maria committed her full life to his upbringing but still found time for a gourmet meal and playing the piano.  Maria was a woman of strong faith and an active member of Prince of Peace.

She was much liked and always had time to teach English to Spanish only speaking adults and children.  She never complained, but lost her long battle with ALS (Amyotrophic Lateral Sclerosis) on October 23, 2015.