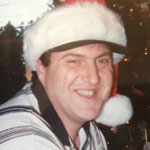 He was the husband of Valerie (Marshall) Dansereau and the son of the late Shirley (Gallagher) Dansereau and the late A. George Dansereau. He was born in New Bedford, Massachusetts and relocated to South Carolina in 2004 with his family.
Dennis attended New Bedford High School and served in the Navy. He was a carpenter and the owner of CostLess Maintenance Service until his illness. He spent many summers swimming, fishing and biking at Charge Pond in Carver, MA. After coming to SC, he and his wife joined Greenville Unitarian Universalist Fellowship, having been former members of the Unitarian Universalist Society of Fairhaven, MA.
Dennis loved life, music, nature, and above all else, his family. He is fondly remembered for chasing rainbows and sunsets, for setting bonfires and sometimes unintentional fires and for playing music that could be heard on the other side of the city. He said the one thing that no one could take away was his smile.
He is survived by his wife of 15 years; brother George Dansereau and his wife Diana; brother Steven Dansereau and his wife Susan; sister Joanne Masson and her husband Roger. He was predeceased by his brother Lawrence Dansereau.
He is also survived by his son Christopher Dansereau and his wife Rebecca; son Kevin Medeiros; daughter Bethany Covington; daughter Kelly Medeiros; son Corey Medeiros, son Nicholas Medeiros; daughter Rebecca Dansereau; five grandchildren and several nieces and nephews.
His celebration of life was held at Greenville Unitarian Universalist Fellowship and included Pink Floyd and fireworks. He is dearly missed by all who loved him.