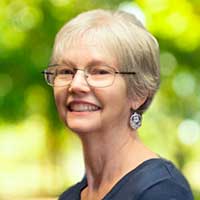 Charlotte was born in Panama City, Florida, but spent most of her younger years in Orlando, where her father owned a barber shop.  Her mother and father are both deceased and she has a brother that still lives in Florida.  She moved back to Panama City in time for high school.  Even though I knew her brother, and most of her cousins, we never met.

By a great stroke of luck, when I landed back in Florida, she and I met and fell in love in just three days.  I asked her to marry me on the third day.  To my great and wonderful surprise, she said “Yes.”

One month later, on May 16th , we were married.  That was 48 years ago.  They went by so very fast that I still don’t believe it.  Her greatest hope was that she would be able to reach our 48th anniversary.  She made it with eight days to spare.  That pleased her no end.

Charlotte loved to paint but never got to have a show.  I’m glad that, at last, she is getting the show she so richly deserves.

Right up to the end, she was always worried about me.  She was afraid that because I had to lift her out of bed, I would hurt my back.  Little did she know, I would have lifted her for the rest of my life no matter what the cost.  But that was what she was like: her dying from the cancer and worried about me.

Charlotte was the bravest person I’ve ever had the good fortune to know.  She didn’t cry and say “why me?”  She just told me, “I’m not afraid of Death, I just hate to leave you.”  She was always worried about how I would make out when she left.  She would write me little notes and leave them on the refrigerator, because I’m forgetful.  She worked hard all her adult life and was heartbroken when, after working so hard to get into a great paying job, she had to quit because of migraines that were so bad she couldn’t function.

I will miss her with all my being.  She made me able to do things that I knew good and well that I couldn’t do, just by saying, “Oh, go on, you can do it, because you can do anything.”  And because she said it, I would do it.

I guess you can say she was my muse.  I would like to thank, on behalf of Charlotte and myself, all the people that she and I think of as family.  You helped us through the toughest time of our lives and because of you, Charlotte was with us way longer than all the doctors said she would be, and I will be forever grateful.

She was my life, my very reason for living.  She made me want to be a better man and I tried my best to live up to her expectations.  I hope it was enough.

Charlotte Christine Donn passed away on May 23, 2017. She was at home and holding hands with her beloved husband Johnnie Floyd and her dear friend, Linda Turner. She was the daughter of Lohman Donn and Christine Scott, both of whom preceded her in death. She is survived by Johnnie and her brother, Virgil, of Pensacola, Florida. Charlotte was a retired underwriter with the Canal Insurance Company. She was born in Panama City, Florida and an active member of the Greenville Unitarian Universalist Fellowship where she often volunteered in the Thrift Shop.

Charlotte and Johnnie were deeply grateful for the care of the pastoral care team and their friends among Earth Spirit and Audrey’s Closet (the GUUF thrift shop).

Charlotte loved Johnnie, her friends, and art. Johnnie said she was always trying to fix Johnnie up with every girl who came along. She was often heard to say, “Now, ya’ll gotta take care of him when I’m gone.” She worried that Johnnie would hurt his back taking care of her, and he recalls that she was so concerned for him, sometimes more than she was concerned for herself.

Among her last words to him were, “I gotta go.”

Johnnie has requested memorials be made to the Greenville UU Fellowship.