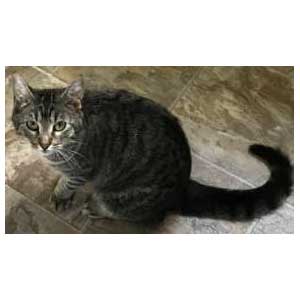 GUUF CAT’S STORY: Our girl appeared a little over a year ago, completely out of the blue. Skittish and wary at first, she wouldn’t let us get close to her, but the office staff left food and water for her which she took willingly, as long as there was no one to disturb her! She had a great knack of hissing at you if you were in her way, or didn’t do something quite as fast as you were supposed to! Then she’d roll over and purr. Talk about sweet and sour! Many of us had a name for her.

The sexton called her Snuffy Kitty, and the Office Administrator called her GUUF Cat. Many of the Fellowship members had their own name for her too. All gave her the space she needed to be free and, little by little, she began to trust a few of those who took care of her – as much as she’d allow anyway! Over time, she got used to the staff. Dare we say it, even liked them, sort of. She used to greet the Office Administrator when she arrived early morning. Purring, jumping around, and demanding breakfast. She used to eat her breakfast in the office, munching away, next to the desk while the administrator worked on her computer. She even got cream as a treat, not that she was spoiled at all!

Her loyalties soon changed when the sexton arrived though. She used to follow him and spent the rest of the day in her favorite spot by the Sanctuary, or exploring the campus. Unfortunately, our little girl used up her nine lives and passed away on February 5. She was loved and will be greatly missed by everyone she touched. Goodnight sweet girl, you’ll always be a GUUFer. We love you. Her grave with appropriate identification and markings is behind the Sanctuary where she often spent her days and evenings.